The Audi Prologue Avant – A Glance Into The Future

In November 2014 at the Los Angeles Motorshow, Audi presented the Audi prologue concept car, giving a look to the brand’s future design language. Only four months later, the premium manufacturer is showing a variant of its visionary concept at the Geneva Motor Show. The Audi prologue Avant combines dynamics, form and function in a perfect synthesis. With a length of 5.11 meters and a width of 1.97 meters, the five-door car with its pioneering body concept positions itself clearly in the luxury class. At the same time, it offers unmistakable sportiness and variability. Technology is becoming an experience, both outside and inside: The driver and up to three passengers can enjoy a luxurious interior and are digitally connected thanks to a state‑of‑the‑art infotainment architecture and connect technology.

The Singleframe grille organically integrated into the car body dominates the show car’s low front. It is positioned lower and is designed much wider than in current production models. Its cross ribs made from brushed aluminum present a new variant of the e-tron look, providing a closed visual appearance. Towards the sides, they are slightly bent and forked.

The wide, folded-out shoulders above the four wheels are inspired by the “blisters” of the Audi proto quattro dating back to the eighties. However, they were not just added on top with separate contours but have been smoothly integrated into the architecture. The shoulders swing smoothly over the wheels. The front shoulder carries on the edge of the engine hood, thus making it appear even longer. The long rear door emphasizes the luxury class character of the show car.

“With the Audi prologue, the prototype meter of our new design language, we have clearly pointed the way in esthetics. Now we are going one step further by presenting a concept which combines esthetics, dynamics and function in a fascinating way” – this is how Marc Lichte describes the character of the Audi prologue Avant. “The progressive body design expresses our technological competence and reveals the values which render our brand unique: sportiness, high-quality, progressiveness.”

The headlamps underline the character of the show car – light-weight, dynamic and elegant. Shaped like wide, flat wedges, the headlamps are located with their tips above the Singleframe. They present the high-resolution Matrix Laser technology – the latest light innovation by Audi opens up new opportunities in design and technology. The light is decomposed into a high number of tiny pixels, resulting in virtually unlimited distribution possibilities.

The rear lamp strip runs across the full width of the car, thus combining the LED rear lamps. They consist of 3D glass which has a sculptural effect. At their bottom end, the rear light draws a wavy contour. Deep inside the lamps lies the brake light – when it becomes active, it appears to approach the viewer. The different design levels and the change between two-dimensional and three-dimensional effects give the rear lamps an entirely new dynamic. 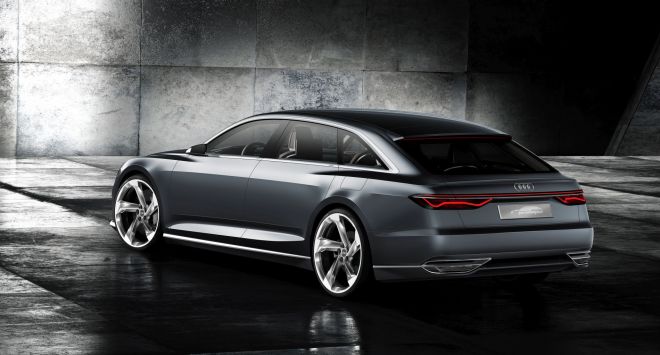 The elegant design architecture of the Audi prologue Avant show car blends in with a game-changing, new display and control concept enabling digital interaction between the driver and his passengers. Across its full width, the front of the dashboard is designed as a display surface which integrates three touch displays. Massive aluminum frames surround the two driver-faced displays left and right of the steering wheel. The left one serves to control the assist functions, the right one is for multimedia management.

The front passenger faces a widescreen display that is integrated into the full surface of the instrument panel; it is used to configure entertainment features individually and conveniently. With a wiping movement, the front passenger can send media content such as music playlists to the right driver display or navigation data to the Audi virtual cockpit behind the steering wheel.

On the console of the center tunnel, there is another display for text entry, air conditioning and infotainment designed for the driver. It consists primarily of an extremely thin, bendable OLED film (OLED: organic light emitting diodes), and it displays extremely sharp images that are rich in contrast. When inactive, the OLED display is in a flat retracted position; as soon as the vehicle is started, it moves up at an angle. The curved display ensures a constant ergonomic distance to the driver’s hand, his wrist calmly resting on the eight‑speed tiptronic selector lever.

The dynamic all-wheel-drive steering system resolves the classic conflict between dynamic handling and stability. The system combines a dynamic transmission steering system on the front axle with an additional steering system for the rear wheels where an electric motor actuates two tie rods.

When the driver steers at low to moderate speeds, the rear wheels turn up to five degrees in the opposite direction of the front wheels. This gives the responsiveness of the car a further boost and reduces its turning circle. At higher speeds, the Audi prologue Avant handles swerving very calmly and with superior reliability: in such a manoeuvre, the rear wheels turn in the same direction as the front wheels.

“With our show car for Geneva, we now translate the design language of the Audi prologue into a new, dynamic and stretched form. We are merging it with a concept of high variability”, says Board Member for Technical Development, Prof. Dr. Ulrich Hackenberg. “The Audi prologue Avant is progressive, emotion-filled and versatile, it reflects Audi’s technological competence and quality claim perfectly.”