The rich list of young and trendy entrepreneurs are on the rise. Consider this Nick D’Aloisio a 17 yer old whizkid sold his app to yahoo just last year for a staggering $30 million US dollars making him one of the youngest self-made millionaires ever. Though Justin Beiber is not the one I talk about, yet at just 20, FORBES measured his two years earnings at about whopping $108 million US dollars. Literally, teenager Madison Robinson, 15, from Galveston Island, Texas, owns Fish Flops and sells flip flops shoes for around $25 a pair, and, just two years since the company’s official launch, over 60,000 pairs have sold, making a tally for retail sales at approximately $1.2 million. I am not going to talk about CEO of Marissa Mayer aged 39 and her six months salary amounts $36.6 million US dollars, or Lucy Baldwin, 29 Managing Director, Goldman Sachs and lastly, as the honors slotted for him at #1 Mark Zuckerberg Aged 26 years worth an estimated $6.9 billion.

Someone and then, a whole lot more than I can imagine must be watching them and their rising earning curve, among them it could be automobile companies as well. Now, I am not saying that every automaker is trying to pitch their best to ilk of young and trendy entrepreneurs as their first desire car. there’s a list of millions who are just happen to fall in the same zone and probably that’s where the bets are placed.

Recently Mercedes with it’s power house associates, the AMG launched: Mercedes-Benz CLA 45 AMG. A car that sits below CLS introduced in 2004 breaking the barriers conventional design to a all new concept of head turning coupe-sedan.

Furthermore, Mercedes-Benz CLA’s athletic characteristics is pronounced with striking tangent on the sides. The dynamic look is reinforced by the AMG “twin blade” radiator grille centered by jewel like LED headlights and the cross strut in the AMG front apron, both painted in matt titanium grey. The whole design is finished off with large butterfly-wing-effect LED tail lights. AMG quad exhaust emitters at the rear with racy air diffuser  rounding the lower end of the bumper. 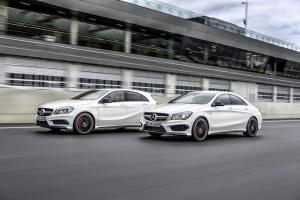 This CLA is derived from Mercedes-Benz newly introduced A class hatchback, also available as A 45 AMG. CLA 45 AMG comes packed with the monster power, The AMG 2.0-litre turbo engine, blowing out 360 hp and up to 450 Newton metres of torque. The brand itself claim: It is the most powerful turbocharged four-cylinder engine in series production anywhere in the world!

It’s a no brainer to know that that numbers screams a top-end performance and hence it is mated with AMG 4MATIC all-wheel-drive system, gives the CLA 45 AMG driving characteristics almost on par with those of a sports car. Number don’t lie here either with CLA 45 AMG coupé accelerates from zero to 100 km/h in 4.6 seconds and its top speed is 250 km/h (electronically limited).

When In Mood, M Is The Mode

Get it right this time about the technology that supports the performance. There is “Momentary M mode”, is a superlative form of over the edge dynamic driving pleasure. However, in C and S mode, this enables the driver to activate manual mode (“M”) without having to remove a hand from the steering wheel, by pressing the “up” or “down” shift paddle once. In Momentary M mode the driver experiences the dynamism and performance of gear-shifting in manual mode in all the automatic driving programmes, with automatic up-shifting on meeting the rpm limit into the bargain. This allows the driver to be one with his machine with focus to extract the vehicle’s impressive performance. 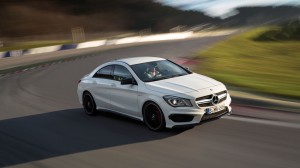 drive with the 3-stage ESP and the ESP Curve Dynamic Assist. The three ESP® stages enable the driver to vary the dynamics of the CLA 45 AMG according to individual wishes at the push of a button. The safety-oriented “ESP ON” mode supports the driver in maintaining neutral handling characteristics. The system initiates braking intervention on one or more wheels and reduces the engine torque on detecting that the operating conditions are becoming unstable.

Just Briefly press the the ESP button to activates “ESP SPORT Handling” mode. The name itself is indicative of performance oriented driving desire. Yet by pressing the ESP button longer deactivates the system as “ESP OFF”.

ESP Curve Dynamic Assist complements the ESP system to perfection: during dynamic cornering, imperceptible braking intervention on the inside wheel gives rise to a defined moment around the vertical axis, resulting in precise cornering and ensuring that the vehicle remains under control at all times.

Now that we know that car is desired by the customers who are young at heart and fully acknowledges the futuristic technologies. It’s no surprise Mercedes invested a good amount of time in designing the interior with Sports seats in ARTICO man-made leather/DINAMICA microfibre with red contrasting topstitching, red seat belts, the multifunction steering wheel with shift paddles, the AMG DRIVE UNIT and AMG door sill panels all come as standard. Information is provided by the AMG instrument cluster with its central color display, the AMG main menu and the RACETIMER.